Readers may be relieved to note that this week’s post takes a break from the subject of deaths after police contact.

The trip from San Francisco to San Diego takes us down CA-1 through the Big Sur. We’re fortunate, as the day before we are due to drive through, the route was closed for about 100 miles. Significant parts of California have been affected by wildfires, exacerbated by the fact that many areas have not seen rainfall for years. In an unfortunate ‘you couldn’t make this up’ (apologies to Richard Littlejohn) incident, the latest fire was sparked (badda-bing!) by someone trying to self-install a hot tub in their garden (really). Whoops! So the drive through the normally picturesque Big Sur is notable for all side roads and national parks being closed, the air being filled with smoke, and huge stocks of fire fighting equipment being dumped everywhere, as well as temporary tent cities for the fire-fighters. It’s sobering stuff, testament to the power of nature (when assisted by incompetent DIY enthusiasts). One exception to the closures is the beach at San Simeon which has an extraordinary number of elephant seals basking on it (see photo below). 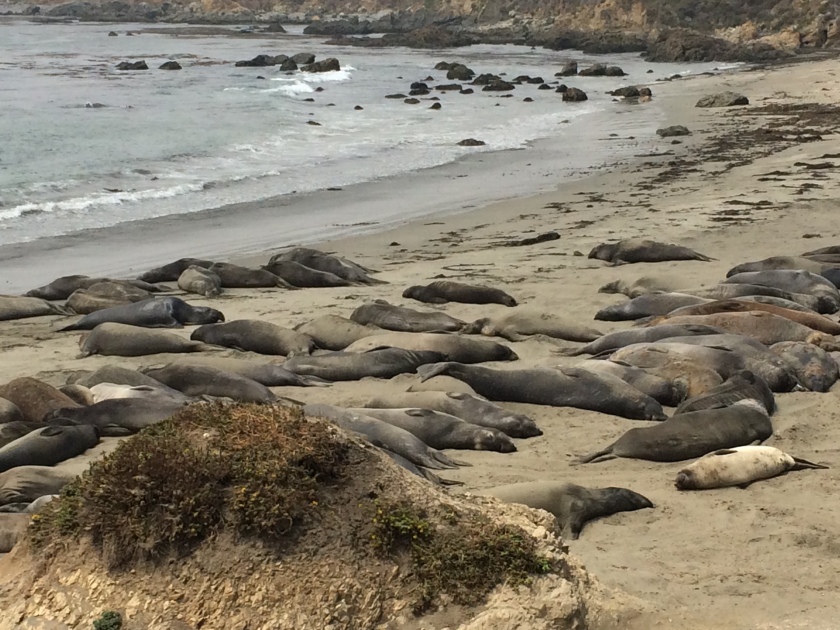 The beaches of southern California are beautiful, special mentions go to Huntington beach and Laguna beach. Miles and miles of fine white powder sand – pretty much how one imagines California looks. In contrast, Malibu is a bit of a dump. Although it does have some top stuff as we drive through. Signs for nude male maid ‘help’ – dial 1-800-728-BUFF. Slightly less exotic, but perhaps just as helpful (depending on your circumstances), dial a criminal attorney (lawyer) to ensure you don’t get locked up: 1-800-NOCUFFS. Who needs metaphor/allegory?

Our trip ends in San Diego, 4 weeks and 2368 miles after leaving Seattle. It’s right on the border and consequently feels half American, half Mexican. It’s big enough to be a proper city (the population is 1.4M) but small enough to navigate on foot. It’s also a relatively new city in terms of its current location, it was re-located during the 1860s, but remained a relatively small backwater until the turn of the 20th century. The ‘old town’ is located inland and is now essentially a theme park – I wouldn’t recommend a visit, although most of the locals recommend it to tourists. The main green area in the city is Balboa park, which is beautiful, vast and definitely worth a visit (see photo below for an example). There is something for everyone’s tastes, and plenty of people are out enjoying the sun and greenery. The sea front is also very pretty and has plenty of places to eat and drink, or just sit and watch the sea with a picnic. The city has a very strong military presence, with a particularly big naval base. It is also extremely proud of this link and this pride is prominently visible, Americans overtly display their patriotism.

I’ve been speaking to Margaret Dooley-Samuli who is Director of Criminal Justice and Drug Policy with the American Civil Liberties Union (ACLU) in California. She tells me that I should do research into the US immigration service and their routine use of unnecessary violence. Because of the climate of fear around immigration, the government has been throwing money at border security for years. Consequently, the number of officers and agencies have increased greatly. There is a lack of oversight of their activities and this is exacerbated by these agencies working in collaboration with individual states and adopting dubious practices. The ACLU has brought a number of cases against these practices, but they’re struggling to get public support due to the broadly negative perception of immigrants in the US.

Having brought up the controversial subject of immigration and border security, I will use that to (attempt to) segue seamlessly into a discussion of the election. So far I’ve managed to avoid talking about it in these blogs, but the electoral machines are starting to really gear up and I think I’ve got to talk about the two ‘combatants’. The public discourse tends to refer to the ‘future commander-in-chief’ and I really think this has to say something about the way the US looks at its role in the world, and about the link between patriotism and the military.

In the five or six weeks I’ve been in the US Trump has managed to insult, demean or belittle just about anyone who is not male or white. He has managed to say he now believes Obama was born in the US (but has not apologised for publicly doubting it for 5 years). He has mused aloud on more than one occasion about the possibility of his rival being assassinated. He’s insulted the parents of an army captain killed on US active service in Iraq. Still he seems relatively stable in the polls, he’s like some sort of radioactive monster that can’t be injured, no matter what he does. I think the following article (disclaimer: it’s written by my cousin) goes some way to explaining his popularity. The other major factor affecting his popularity is, of course, his rival’s lack of popularity.

Clinton has got her own problems. A significant portion of the electorate don’t trust her, the travails with her emails and the Clinton Foundation are examples of her apparent inability to see how badly these play to wider society. Bolted onto this is her refusal to give press conferences which makes it look as though she is sticking to a script rather than being subjected to public scrutiny. One of the more crazy facts to come out recently is that the US government sent a plane to Iran with $1.7bn IN CASH  at the same time as a number of US prisoners were released by the Iranian government. The US government says this money was in payment for a deal that fell through during the Iranian revolution in the 70s – everyone in the US believes it’s ransom money. And of course, Clinton is a key part of the current administration. I’ve seen and heard a number of incumbent Democrat senators decline to overtly say they trust her when questioned directly. The recent health scare reinforces it – not the fact that she has pneumonia, but that she and her team tried to cover it up.

There are 2 other candidates in the election. Gary Johnson, the Libertarian candidate was doing quite well, polling at between 7 and 9% until he made the basic error in a press conference of honestly answering a question with ‘what is Aleppo?’ Gill Stein is the Green candidate and polling at 3-4%. She seems to be more switched on, but has also made the basic political error of actively doing something she actually believes in by getting arrested in the huge protests in North Dakota in support of Native Americans. I’ve mentioned before the way Native Americans appear to be written out of US history. The current stand-off in North Dakota effectively repeats history – it’s about land exploitation and environmental degradation. I’ll give you two guesses which side the Native Americans are on. The excellent ‘Bury My Heart at Wounded Knee’ fully documents the destruction of Native Americans during the expansion of the United States. One of the key sites that tribes attempted to protect at all costs was around the Missouri river – history is repeating itself more than one hundred years later. This article gives you an idea of the situation, please search the net for further articles.

That’s me done on the west coast, the rest of the blog will be written from the eastern side of the US. Next week’s posting will come from Charlotte, North Carolina.